Workplace Investigations: How do you decide which witnesses to interview? 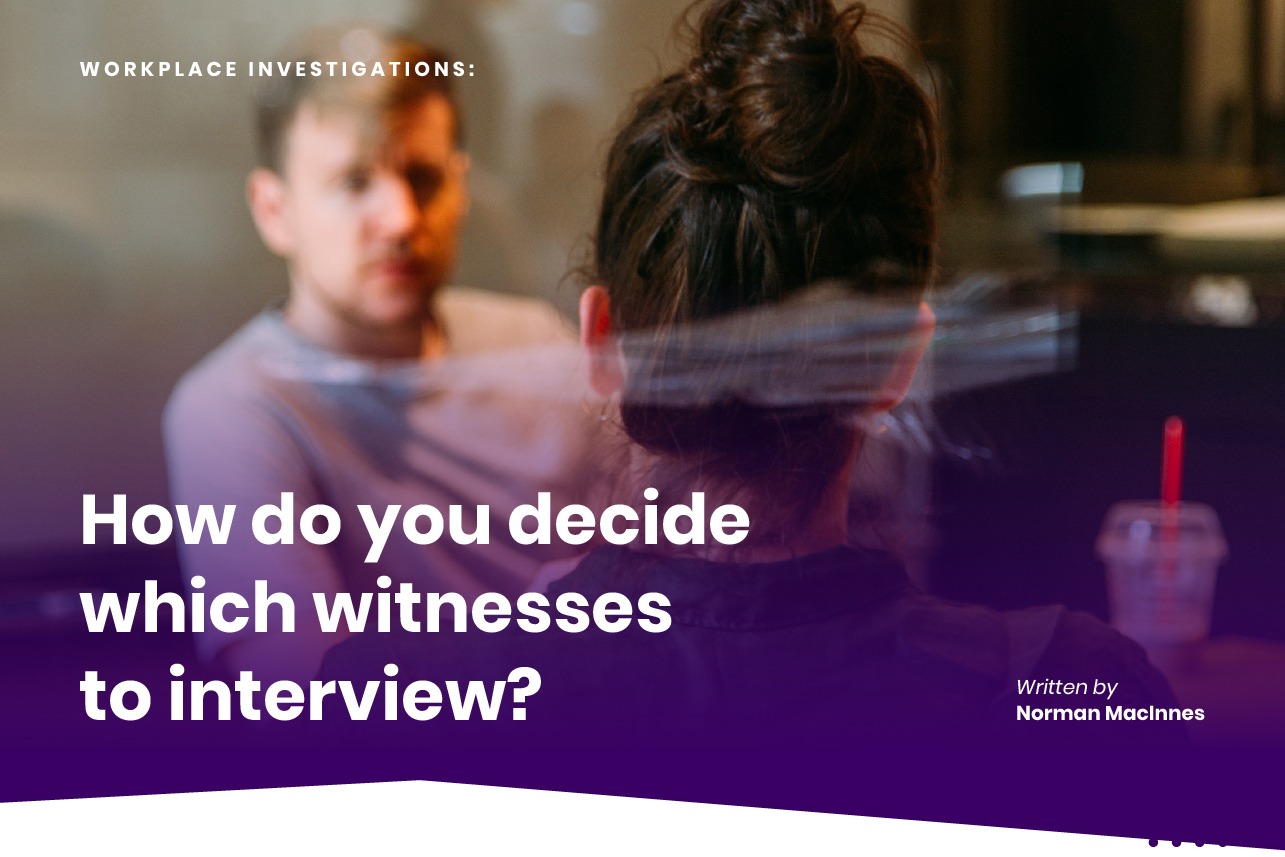 How can you ensure that you get the information that you need while not extending the net wider than necessary?

“Many investigators when they’re starting out take the shotgun approach and try to get as much information as possible,” says Michelle Bird, Senior Workplace Investigator at Certitude Workplace Investigations. “But that’s not actually a neutral approach, because the more people you interview, the more people know about investigation and the less confidentiality you have.”

It’s natural to want to be thorough, but “you also get a lot of information that isn’t directly relevant, which can bias the investigator,” Bird says. “Learning more than you actually need to know might affect your decision-making.” 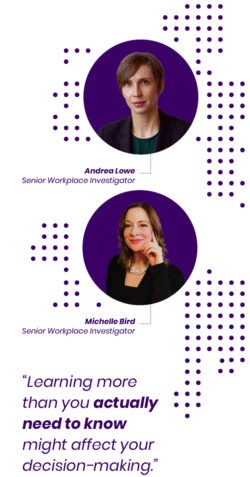 But conducting a workplace investigation always involves balancing competing considerations, says Lowes. Despite the compelling reasons for not interviewing too many witnesses, as a practical matter, the investigator may sometimes feel it is necessary to interview a witness who ultimately may not have anything new or different information to provide, but to ensure that the investigation is complete and fair.

Bird always tries to interview the complainant and respondent first to evaluate how far apart their stories are on the facts – “not their impressions that they’ve formed of their interactions – but the facts.”

Then she tries to identify the witnesses who might have the information needed to sort out the factual differences in their stories. Who was present at the interaction and directly witnessed it? If no one else was present, who first talked to one of the parties immediately after the interaction?

Sometimes the parties suggest witnesses, says Bird, but sometimes they say, “talk to whomever you need to talk to,” and it is up to the investigator to come up with the witness list. The investigator might start, for example, by asking the employer which employees attended the meeting or took the same lunch break or have a desk in the office where the alleged interaction took place.

Lowes also tries to interview the complainant and respondent first. One advantage of doing so, she says, is that sometimes the respondent may admit to all or some of the conduct complained of, in which case a witness may not be necessary to establish this evidence.

Lowes asks the parties who they think can help her to gain a clearer picture of what happened. The highest priority witnesses to interview are those who directly observed the interaction. In the next category of priority is a “confidant” witness – a friend or colleague to whom the complainant spoke immediately after the interaction (“You’ll never believe what just happened!”). 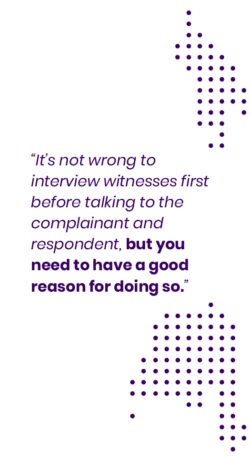 Balance what is ideal with what is practical

After interviewing the parties and preparing a list of witnesses, ideally Bird tries to talk first to the person she thinks will be the best witness. “If you have a really good witness,” she says, “you may not need to interview other witnesses.”

But Bird and Lowes acknowledge that in a workplace investigation, it’s not always possible to choose whom to interview first.  Availability of witnesses is always a potential problem.

Interviewing witnesses before meeting with the respondent may be necessary in the interest of commencing a timely investigation, says Lowes – for example, if the respondent is not immediately available (or willing) to be interviewed.

“It’s not wrong to interview witnesses first before talking to the complainant and respondent,” says Bird, “but you need to have a good reason for doing so.”

In one of her investigations, for example, the complainant had been traumatized by the interaction, was off work, and was able to provide very little information, but some other employees had witnessed the interaction that gave rise to the complaint.

It may also be appropriate to interview witnesses first in the case of an anonymous complaint, says Bird. (Anonymous complaints are relatively rare, she says, but do happen.) Several individuals may be mentioned in the anonymous complaint – for example, six people who were at a meeting where the alleged misconduct took place. 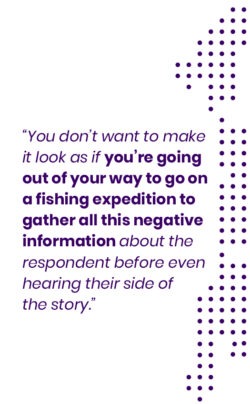 In this situation, it is fairer to the respondent if the investigator talks to these witnesses first to gather enough information to give the respondent particulars of the allegations to which he or she can respond.

But the investigator must proceed carefully in these circumstances, says Bird. “You don’t want to make it look as if you’re going out of your way to go on a fishing expedition to gather all this negative information about the respondent before even hearing their side of the story.”

When choosing witnesses to interview, an investigator must always screen for direct relevance, says Bird. Complainants and respondents will often suggest witnesses who will say that a party is either a good person or a terrible human being. But such character evidence is not directly relevant, says Bird. Lowes agrees: “A character witness is unlikely to be able to provide direct evidence of what happened.”

In the same way, the parties will often suggest witnesses to provide similar fact evidence. For example, a witness may be prepared to say that the respondent acted like a bully during an incident five years ago. “Unless it’s exactly the same fact situation, it can take the investigator down a slippery slope if you start looking for everyone who had a bad experience with this respondent,” Bird says.

Bird tries not to screen out witnesses who may be partial. Just because witnesses are friends or family members of the complainant or the respondent doesn’t necessarily mean that they are lying, Bird says. Partiality is, of course, a factor to be considered in assessing their credibility and weighing their evidence, but what they say and how they say it is more relevant.

Be able to justify your decisions and take notes

You always need to have a good reason for the steps that you take as an investigator, says Bird, and “take really good notes about why you’re doing what you’re doing in the moment.” Five years down the road it can be hard to remember why you decided not to interview certain witnesses if you are asked this question by a client or a tribunal.

Norman MacInnes is an Ontario lawyer, writer, and editor with 30 years of legal writing experience

Andrea Lowes has extensive experience investigating all types of problematic workplace behavior. While working in private practice, government oversight, and self-regulated professions, she has conducted investigations of organizations both large and small. Her diverse professional background provides her with the skills necessary to address concerns ranging from the most straightforward, to those involving multiple parties and complex and sensitive issues.

Michelle Bird is a people-focused professional with more than 15 years of experience in workplace investigation and training. Her experience as an investigator encompasses many types of work environments, with particular focus on municipal governments, colleges, and universities. Michelle has ample experience investigating complex cases involving sensitive subject matter, including cases related to sexual harassment and sexual violence.

Workplace Investigations: How do you decide which witnesses to interview?

Workplace Investigations: How do you decide which witnesses to interview?
Read more